The Tsar is continuing his spree of premeditated murder across Ukraine.

Our government’s inaction and unwillingness to supply Ukraine with the necessary weaponry, such as Leopard-2 tanks, is beginning to get us into the realm of accessory to murder.

Not that the Greens are any better than the Social Democrats. They do support Ukraine, but at the same time, they have conveniently forgotten about the impending climate emergency. They are sending riot police to help RWE in literally burning our future.

Last Saturday’s rally in Lützerath saw a lot of violence from some riot police units against climate activists, which will need a follow-up in the state’s courts. As Peter Kalmus wrote: “Your kids and grandkids will want to know if you got arrested for the climate.”

The gap between the Greens and the climate activists is widening by the day, leaving us with no political party supporting the climate justice movement at the government level, which does not bode well for our planet’s future. 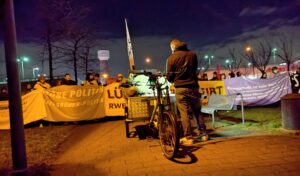