The Tsar has expanded his murderous spree and given up on all pretense to target military installations. During the last weeks, he has been trying to destroy all civilian infrastructure and bomb the people of Ukraine into submission.

Despicable. But some people in our government circles still want to negotiate with him, both from the far right and far left. Our aid is only half-hearted, and we’re sending much less weaponry than we could.

A very positive development this week was that Brazil elected a progressive candidate for president. Excellent news for the people of Brazil and the Amazon rainforest!

Not so good was that Twitter now has an alt-right owner and started laying off engineers and dismantling content moderation immediately. If you are on Mastodon and would like to follow me there, here’s my handle: @chfrankcgn@chaos.social

Even more devastating news came from Seoul, where many people were killed in a mass panic during the Halloween celebrations.

Let’s hope next week will bring some good news – the second season of To Your Eternity has started simulcasting on Crunchyroll! 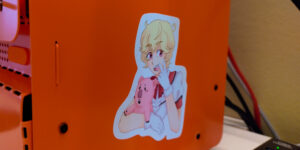